The High West Distillery is the only ski-in, ski-out gastro-distillery—and it’s just steps from the chairlift at the bottom of Park City Mountain Resort’s Town Lift. The property includes two bars, a restaurant, a historic townhouse, and the old livery stable where small-batch whiskeys and vodkas are distilled in a traditional 250-gallon copper pot. Shred your way down the mountain’s Quittin’ Time run, then make your way inside for a guided tour, whiskey tasting included. Try the Rendezvous Rye, High West’s most popular blend.

Part of the 4 Vallées ski area, the largest in Switzerland, Verbier is where you come if you want to party as hard as you ski—and Hotel Farinet, situated next to the Medran gondola, is where you go to do one after the other. The hotel was bold enough to call its bar Après Ski, so you know they live up to the moniker. It’s known not just for nightly live music, but the retractable roof which they keep open on bluebird ski days. When the snow really starts coming down, it closes automatically. 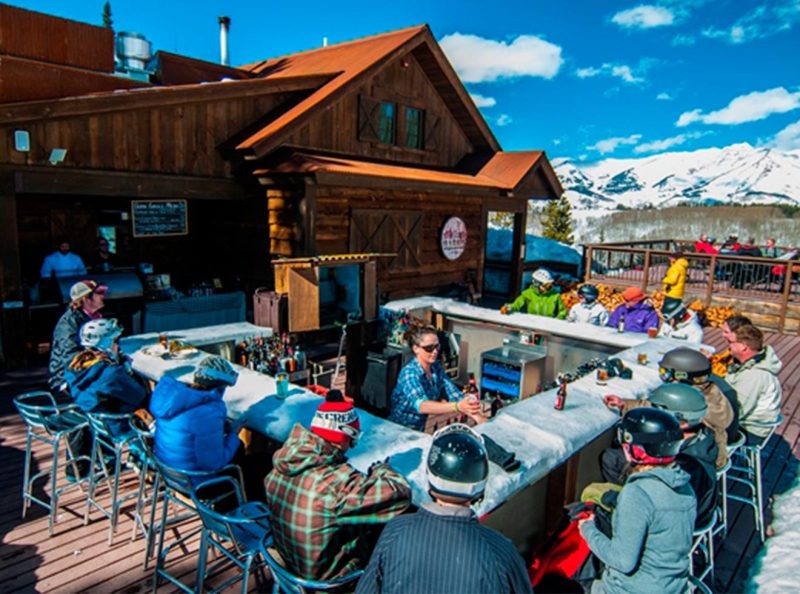 3. The Ice Bar at Uley’s Cabin

The charmingly rustic Uley’s Cabin—a nod to historic bootlegger Uley Scheer—on Crested Butte Mountain is the slope’s fine dining restaurant. It’s located mid-mountain at the base of the Twister lift (it’s also accessible by snowcat-drawn sleigh rides in the evenings). Skiers and snowboarders who just need a quick break to warm up and refuel can ski right up to The Ice Bar out front and order Colorado beers and cocktails made with locally distilled spirits. And, as you might have guessed, the bar is made of ice and covered in snow.

Follow any of the ski runs to the top of the Meribel Ski Resort and you’ll find yourself at Rond-Point, aka Ronnie. There’s live music and an on-slope happy hour every night from 5 to 6:30 p.m.; the toffee vodka is poured so generously, you’ll be glad there’s a bus stop right nearby in case the trails are starting to look fuzzy from your vantage point over the Trois Vallées ski area. Fun fact: There are actually slides down to the bathrooms so you don’t have to negotiate stairs in your ski boots (well, at least on the way down).

Perched nearly 11,000 feet above sea level on Highlands mountain in Aspen is Cloud Nine Alpine Bistro, which you can access from the mountain’s Cloud Nine or Loge Peak lifts. The former ski patrol shack is as famous for its panoramic views of the Maroon Bells as it is for its wild lunch seatings. If you’re lucky enough to score a reservation to the 2 p.m. seating, you’re likely to end up dancing in your ski boots, rubbing shoulders with A-listers, and spraying Veuve Clicquot around like you’re in an early-2000s music video.

La Folie Douce’s champagne showers make Cloud Nine’s look like a mere drizzle. Located at the top of the Daille cable car, this sprawling establishment in Tignes (there are also outposts in Val Thorens, Meribel, and Alpe d’Huez) is so much more than an après ski bar. There’s a cabaret lunch/dance party led by a crew of singers, musicians, dancers, and DJs that starts at 1 p.m., then the terrace turns into an open-air club scene right at 3 p.m. 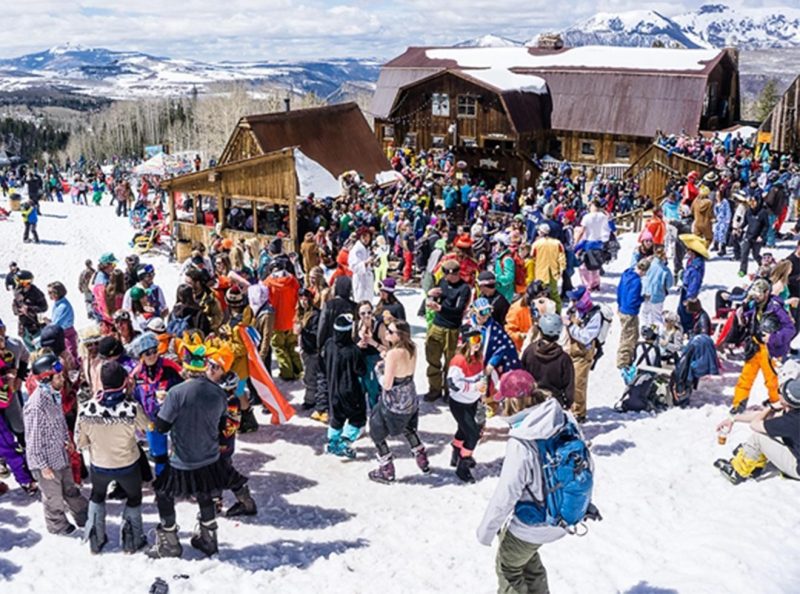 Converted from an 1800s sheep ranch, Telluride’s Gorrono Ranch is the main spot for skiers and snowboarders to refuel while on the mountain. It’s located under the Village Express Lift 4 on the Misty Maiden run. There’s a fire to warm you up inside, but most people opt for the chairs on the snow deck, where you can enjoy your BBQ, chili, and burgers with spectacular views of the Wilson Mountain Range (the same mountains you see on Coors Light bottles) in the background.

One of the wildest slopeside party places, you can ski right into Hennu Stall on Klein Matterhorn if you’re on your way down the Furi-Zermatt slope (it’s also just a 30-minute walk from Zermatt itself). When it’s sunny out, the DJs and bands take to the terrace; otherwise, skiers and snowboarders cram themselves into the two-level shack where you can actually partake in a meter-long shotski. Be careful: The Swiss here love their Jaeger shots, and you do have to ski back to town.

Heavenly’s mid-mountain Tamarack Lodge, which sits at the bottom of the resort’s main lift area, has no road access, and requires a 12-minute gondola ride from street level. Most of the time, it’s your average ski lodge. But from 3:30 to 5:30 p.m. daily, it turns into a club-like happy hour complete with live DJs and half-price drinks and food specials. Fridays and Saturdays are especially wild, with a crew of Heavenly Angels in knee-high fur boots (and not much else) to remind you that half of the resort is in Nevada. 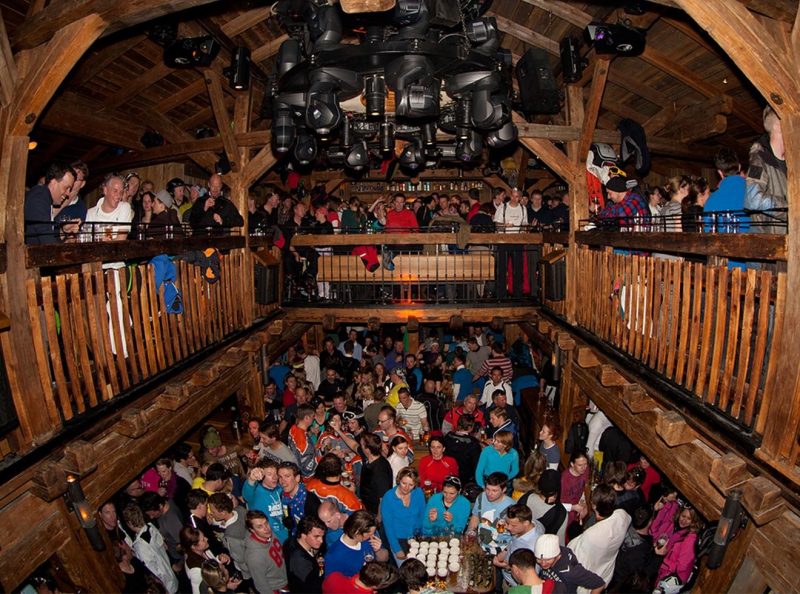 The party starts at MooserWirt—the most popular slopeside bar at Austria’s famed St. Anton Ski Resort, the entry point to the massive Arlberg ski region—at 3:30 p.m., when the DJ kicks off the daily après ski session. That makes it sound tame; what this really is is a bass-thumping, lights-flashing, table-dancing event that lasts for four-and-a-half hours. If you manage to stay standing the entire run back into town at 8 p.m., you didn’t do it right.